Balancing ourselves on the ice, we stood by the geyser, waiting for it to erupt, the feeling that the Earth was breathing and alive, just below us and all around. The geyser erupted, the sound drowning out the gasps and cheers of the crowd all around. Mountains covered with moss and snow everywhere made us feel isolated despite being surrounded by tourists.

That night, we went chasing the Northern Lights, stopping in the South of Iceland somewhere next to the sea. The Aurora borealis are formed by the collision of gaseous particles in the Earth’s atmosphere with charged particles released by the Sun. Tourists from all over the world come to these parts to experience them and we heard stories of sightings and non-sightings wherever we went. Stars hung low and our imaginations were in high bands of energy. It was freezing, and as we stood on a mound and stumbled, we realized that we were standing on some old gravestones near a church in the dark. We ached to see green lights above us, but we were forced to turn back.

The next day, we went to Reykjanesbær, towards the west of Reykjavik. There were black, volcanic rocks all around with the sea crashing against them. Walking outside, we were reminded of how hostile the climate was, although not as cold as we had imagined. Iceland, being in the North Atlantic current, is blessed with a more temperate climate than one would expect from the Arctic Circle.

We stopped by a frozen lake. It extended out to the horizon and we stood in silence. Although time passed fast as we moved past these magnificent landscapes, our thoughts seemed to move on a slow crawl, overpowered by the splendour around.

The sun came out as we made our way to Vik in the south. We stopped at Skogafoss, the waterfall lit up by multiple rainbows. Climbing on to the trail that took us to the top of the waterfall, we were surprised to find open meadows, the view of the estuary and flatlands on one side and the town on the other. As we followed the path by the waterfall, the waterfall grew wider, ice formations on each side and the sound of the water omnipresent. As I imagined the place transforming in the summer, and in every season, I had the feeling of openness, all trivial details falling side.

When we drove to Reynisfjara shore to experience the black sand beach, the sun was setting, the orange light in stark contrast with the black rocks and sand, white waves crashing loud against them, the haze mixing all colours. As we drove back home to Reykjavik, I was refreshing the aurora forecast on my phone on repeat. I was prepared for the worst, and had made up my mind to revisit again another time if I couldn’t get a glimpse of the lights this time around. This didn’t keep my heart from beating faster. It was dusk and there were clouds in the sky. One of the clouds looked suspiciously large and wave-like. My friend laughed at my over-excitement, but I managed to convince him to stop the car. We waited. When I looked up at the wave-like cloud as it got dark, the cloud was green. There was no mistaking it this time, the Northern Lights had come to pay us a visit. I was clapping my hands in glee. We drove again and stopped after a while, the lights were taking over the sky in green waves. As we stared and stared, a bus pulled over – the tour bus that we were on some days ago. The tourists tumbled out on top of each other, to take a look. But by then the lights were disappearing. We laughed and made our way back in a happy daze. 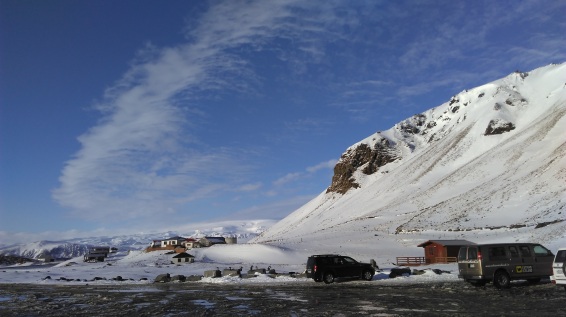 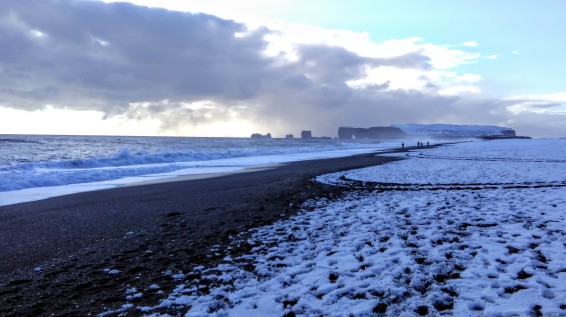 When we parked the car outside our hostel, we stepped outside to find brighter, greener, aurora borealis. My friend and I looked at each other in disbelief – we had been chasing this solar activity for the last few days and in the end they visited us in the parking lot of our hostel in Reykjavik. This time there were shades of pink and light purple, and the lights danced across the sky, as though chasing each other. I’m not entirely sure why those lights cast such an enchanting spell on all of us, but I had pleasant dreams that night. 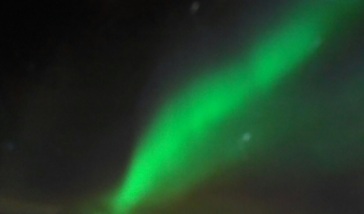 Coming back to London, I noticed a heightened focus towards the sounds of birds and other carbon forms. Impressive as it was, there was something quite desolate about the landscape in Iceland. As the country is so sparsely populated, it’s not rare to encounter places with very few humans or living nature, if at all. Equally, all elements of nature seemed raw – snow, glaciers, mountains, volcanoes, moss, geysers, lakes, rivers, waterfalls, rocks, solar activity, the Northern lights, stars, sun, moon, oceans.

Iceland was a lesson in real-time geography. It was an honour to experience the Earth transforming herself at such close quarters. 4.6 billion years and still going – that’s some serious inspiration.