Tallinn, the capital of Estonia, prides itself on preserving its medieval history. Its Old Town is a UNESCO heritage site, attracting millions of tourists every year. It is possible to imagine what it might have been like hundreds of years ago, bustling with people selling their wares in the market, nobles passing along on horses, worshippers finding refuge from the cold in the Alexander Nevsky Cathedral. But, like any other place smartened up to make for good photographs, it feels disconnected from the city, a sort of enclave of ornaments to gaze at. Charming but lacking in essence.

It is only early in the morning, when gazing upon the Old Town from one of Tallinn’s many viewpoints, in the context of its place in the wider city, does one come to appreciate it. Layers of the city laid out in the order of development – the tiled roofs and towers of the Old Town, the communist blocs morphing into the swanky business district, the forests and the sea in the distance. 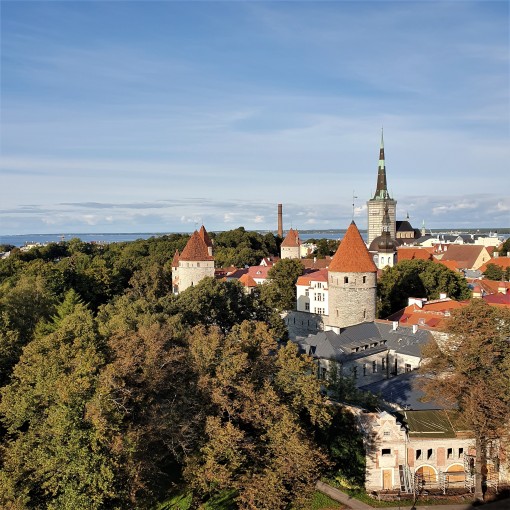 Near Tallinn’s main railway station (Balti Jaam), is a large market complex, Balti Jaam Turg. It has a past right out of an Edgar Allan Poe story. In the 19th century, a doctor wanted to build a care home for people who might come back from the dead. For some time, people left the dead there, comforted that there would be a place to care for them if they did come back. But the dead did not return, and the landlady got upset about having all those dead bodies there, so she turned the place into a hotel. Eventually, the railway station was built close by, and the buildings became warehouses. Today, it is bright and vibrant, with three floors of market and food stalls, its grim past forgotten – a fascinating place to visit.

Past the market lies Telliskivi, Tallinn’s creative quarter, also built in converted warehouses.  The colours and shapes of artefacts strewn about lie in contrast to the buildings. It is full of cafés, galleries, designer stores and hipsters milling about in droves. If in need of entertainment, there is plenty to be found by going into one of the shops and just eavesdropping on people examining the overpriced wares on display.

A bus ride takes you from Tallinn’s centre, past the sea and through pine forests to arrive in the coastal suburb of Pirita with views out to the harbor. People windsurf and fish here even on grey, windy days.

You will spot an intimidating, concrete tower stretching out to the sky. This is Teletorn, the TV Tower. The view from the tower is exceptional – the botanical garden, large land masses covered in forest and beyond the Baltic, perhaps even Finland. 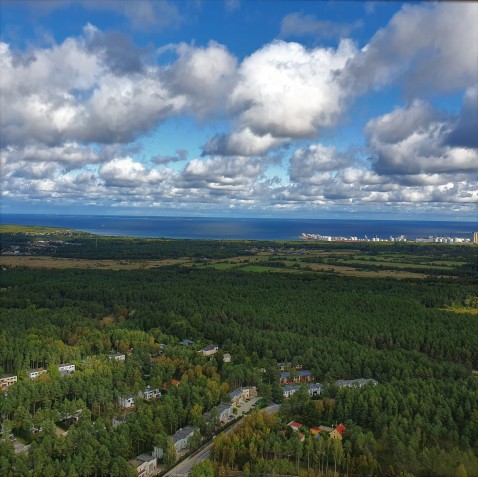 Just near the tower is a quiet, green cemetery, surrounded by a forest full of pines, mushrooms and birdsong. Walking past the old graves, reading some of the names bring to mind the characters from ‘Truth and Justice’,  a novel by A.H. Tammsaare. A long novel of several volumes, often called the ‘Great Estonian Novel’, its story starts in 19th century Estonia. It depicts the lives of farmers and their struggles in the detailed style of the Russian writer, Dostoevsky, who Tammsaare was inspired by.

During the Soviet time, the book was first banned because of Tammsaare’s opinions about the revolution, but then it came to be categorised as a book about the value of working hard. Some Estonians try to get out of reading this book at school, but most of them know about it. Considering the number of parks and statues bearing Tammsaare’s name, the respect Estonians have for him is evident. 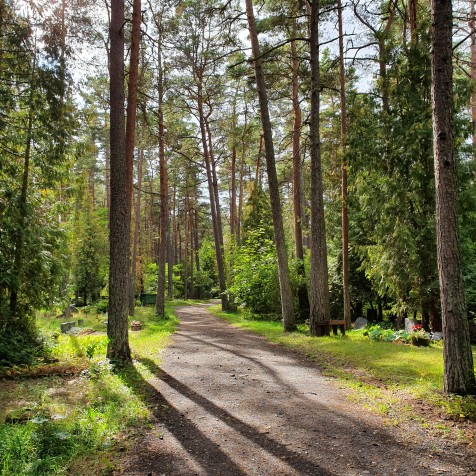 To the north of Tallinn, a train ride way, lies the town of Rakvere. Past forests and bogs, further on, lies Narva, the easternmost part of Estonia, and then St Petersburg. Estonia was governed successively by the Danish, Swedish, Germans, Poles and Russians. A quarter of the population are still Russian, and it is not uncommon to hear the language being spoken in many of its towns.

Rakvere plays host to a few punk music festivals and also has an old theatre culture, like many other parts of Estonia. On a weekday, its 13th century castle ruins are impressive but without visitors. A strange, beautiful creature stares down at you from the edge of  Vallimägi hill. This is a bronze statue of an aurochs, an extinct species of wild cattle, made by the Estonian sculptor Tauno Kangro.

Tallinn’s Kumu Arts Museum stands tall in the beautiful Kadriog Park. The architecture of the building is interesting – circular, in balance with the park around.

To visit the museum and explore its art is to understand a bit more about Estonian history. Paintings date back to the landscapes from the 18th century,  when Estonia was part of the Russian Empire but in the hands of Baltic German nobles. In the 19th century, with national awakening came the first ‘Estonian’ artists such as Amandus Adamson. Art was inspired by national epics and other movements, including modernist ( Konrad Mägi), constructive (Märt Laarman), and impressionist (Aleksander Vardi). Then of course, the World War, and paintings reflecting life and culture during the Soviet era.

Estonia is a small country. It has 1.3 million people and half of its land is covered in forests. It is not without its problems. Places like Rakvere appear to be neglected. In Tallinn station, homeless men scavenge the bins. The country’s Russian population face difficulties to integrate. But this is a country in constant flux. Today, 99% of Estonia’s public services are available digitally. It conducts its elections online and even allows you to apply for e-residency. On their site, the government advises you that ‘for marriages, divorces and real estate transactions, you still need to get out of the house’, a humour typical of the Estonians. Oh, and just in case you haven’t heard, it gave us that connector of worlds – Skype.

The natural landscapes of the country are enough to make you want to go back. And if nothing else, there is a lot you can learn about how a country can brand itself.